Are you interested in livestock business? How well are you prepared to fight all the problems affecting other farmers in this industry? Well, if you believe you are ready, how are you going to solve the problem of animal feeds shortage and spoilage during storage? If you can answer this question, right, then you are ready to venture into the lucrative livestock farming business. In a nutshell, it’s evident that animal feeds shortage either due to drought or spoilage of the preserved feeds is among the major problems affecting the livestock farming business. Therefore, if you can be able to fight this problem, then you will smile all the way to the bank. 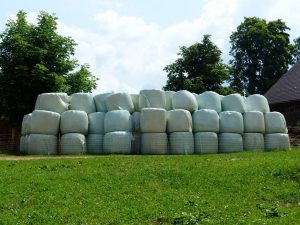 Now animal feeds spoilage either on the farm or during preservation is a problem that affects many farmers. In fact, in more severe cases this issue has made some farmers to give up their dream of running a livestock farming business due to massive losses. First, let’s start by spoilage of animal feeds in the farm before preservation. By spoiling, it does not necessarily mean rotting. It can as well be as a result of overgrowing which results in low nutrient content which means that the livestock animals will not benefit from the feeds served.

For example, if you want to preserve animal feeds, there are the best stages for different crops to be harvested for preservation. For example, take a case like if you’re making silage from maize stalks. You need to collect the feeds for preservation after flowering, or a few weeks after flowering since during this time the feeds are very nutritious.

The reason why there is animal feeds spoilage is that either the farmer is not aware of when to preserve or do not know the right ways to protect animal feeds. Now, if you want to fight this whole issue of animal feeds spoilage and shortage, you need to learn and adopt new ways of preserving animal fees that are very effective both regarding the quality of feeds and cost. I am talking about the use of silage film.

It is an exceptional plastic product used to cover silage in silage pits or to wrap silage into bales. By using this product, you can guarantee that at the time of feeding, the feeds will be of high quality and there will be no feeds spoilage as long as you follow the manufactures instructions. Also, by using silage film, you will never have to worry about animal feeds shortage. Since this product is weather resistant, you can preserve as much feeds as you may want and leave the bales on the farm. It means you have no limit on the number of feeds you can preserve and so you will always have plenty of feeds for your livestock and hence high production which leads to high profits. To buy this and other wrapping products, click here.