If you’ve been to farmlands and other agricultural centres, you might have noticed the massive stacks of hay wrapped in black-coloured films while covered and held together by a large net. It is the process of storing silage to be used as forage or animal feed once they develop. The black-coloured sheet of film that’s used to wrap the silages is called a silage film. It’s also available in other colours.

The silage film is one of the most popular items when it comes to silage making that are wrapped into bales. They’re mostly used for making round bales that are stored in the fields. That way, the silages will stay safe and secure even under harsh outdoor conditions. This type of film is an absolute essential as it provides a farmer’s with benefits and perks. With that said, here are three reasons why farmer and agriculturists love using a silage film.

It Gets the Job Done

The first thing that entices people to use a silage film is its performance and ability to get things done at a fast and convincing rate. Since it’s a film, it doesn’t require many rolls to cover a bale of silage completely. All you have to do is cover your bales completely with film and then tie it with twine. This process is more than enough to provide you with enough protection for the entire duration of the storage process. So without any doubt, a silage film is a fantastic item to have when it comes to bale wrapping.

Made of High-Quality Materials

What makes a silage film the most commonly used bale wrapping film is what’s inside it. Made from premium quality resin and other components, it offers supreme durability and longevity –  both of which are essential aspects when it comes to wrapping and storing bales. This high-quality film ensures lesser chances of breakage, which means you won’t have to worry about leaving your bales out on the field even when on bad weather. Your bales are well-protected; there won’t be any change of quality when you use a high-quality film such as this one. 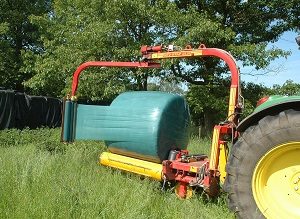 Finally, as said earlier, a silage film has all the qualities and features that help it repel the harsh conditions of the outdoors. It features heat and water-proof system which helps protect and secure your bales even when stored outside. It also prevents moisture from seeping in, keeping your silage fresh and nutritious for your farm animals.